[introduction to collection]: Buddha is the transliteration abbreviation of Sanskrit in India. Its full name includes "Buddha", "futu", "Buddha map" and other names. It is translated as "awakener" or "wise man" in free translation. It is all wise men who are fully aware of various Dharma principles, have clear understanding, and have no surplus. Sakyamuni Buddha, the founder of Buddhism. Born in 566 BC. Sakya is a race name, and Muni means sage. It is said that he was the son of King Jingfan in Nepal. He was good at thinking when he was young. Although he lived a comfortable life, he felt the phenomena of life, old age, illness, death and so on in real life. He thought that only by becoming a monk can he find the way to extricate himself from suffering in order to save mankind. When he was 29 years old, he went into the forest to find the truth of extricating himself from suffering. After six years of hard work, he finally succeeded in practicing under the bodhi tree at the age of 35. He founded Buddhism, which can free all living beings from suffering, and became the founder of Buddhism. After 45 years of missionary activities, he entered Nirvana peacefully in the cry of all his disciples. He was 80 years old. 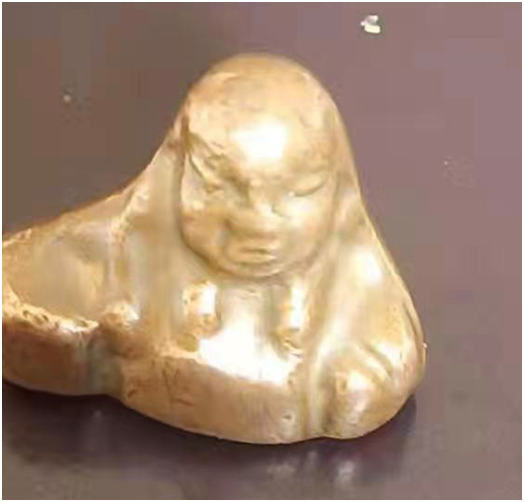 This little golden Buddha weighs 85.5g and is made of gold. It is exquisite in shape, soft and smooth in lines, kind and solemn. It is only an inch high, but it accepts boundless Buddhist dharma. It is deeply solemn and magical. Such small golden Buddha made with full gold was made in all dynasties after emperor Shunzhi of the Qing Dynasty. The details can be found in the late Qing Dynasty. It is said that emperor Shunzhi believed in Buddhism all his life and was very close to the famous monks Yulin Su, Mu Chen and Mao XISEN at that time, so it affected the Buddha statues of the whole Qing Dynasty. Today, when it comes to the collection of Buddha statues, there is no doubt that the Buddha statues of the Qing Dynasty bear the brunt and constitute the main body of the investment market of ancient Buddha statues in China today. This golden Buddha is richly wrapped and naturally formed. It is even more rare to preserve it. It is a top-grade Buddha statue in the late Qing Dynasty and has high cultural and artistic value and collection value.

It has been more than 2000 years since Buddhism was introduced into the Central Plains of China in the Eastern Han Dynasty. The artistic value of Buddha statues before Tang Dynasty is very rare in the market because of its limited existence. The gold and copper Buddha statues of the Ming and Qing Dynasties constitute the main body of the investment market of ancient Chinese Buddha statues. The gold and copper Buddha statues were very popular in Ming Dynasty. This collection is a small golden Buddha in the Qing Dynasty. Buddhist statues, which have been handed down for hundreds of years, have not only become a collection, but also a new favorite in the art market.. Buddha statues have a wide range of folk belief foundation. They are sentimental, compassionate, and willing to "seek the Buddha's way from the top and transform the common people from the bottom". They are of great compassion and help the people in distress. This small golden Buddha is elegant in design and rare in quantity. It is a high-quality collection product with great popularity and immeasurable academic and historical value. Golden Buddha is a precious gold ingot cast and issued by ancient countries. It's a rare treasure today. The ingot shape of this little golden Buddha has obvious style, clear stamp, original slurry, and top quality. It's heavy to hold it in hand. This little golden Buddha, which has accumulated years of history and culture, naturally surpasses the pure gold itself and has great collection value.